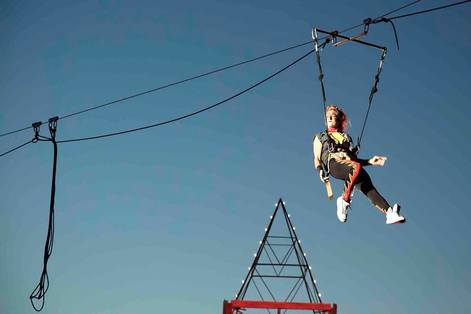 A special comission from BoomTown Fair, Produced by Bassline Circus and created with support from Arts Council England. The Boomtown Games was A tale of favela style gang battles in a competition between rivals for the top spot - The approval of Comrade Jose (the leader of BoomTown) and keys to a luxury city apartment.

The show concept included two large ziplines which crossed above the audience from one side of the arena and deposited performers onto the stage to commence battling.

I was involved in the design and choreographic elements of working the ziplines into the other show themes.

The show was directed by Bex Anson 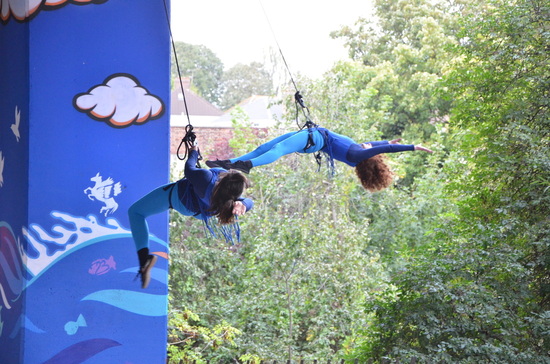 Flow was commissioned by the environment agency and was designed to raise awareness about life in flood zones within the UK.

The performance project was produced as part of the Multi Story Water events, a weekend of community activities that took place in and around the M32 underpasses in Bristol.

The Project involved over 180 performers, a mixture of members of the community, local groups, youth dance companies, dance students and professional performers, Full Tilt worked with a group of graduate circus artists, training them in harness based aerial dance before putting together a twenty minute finale piece to end the performance 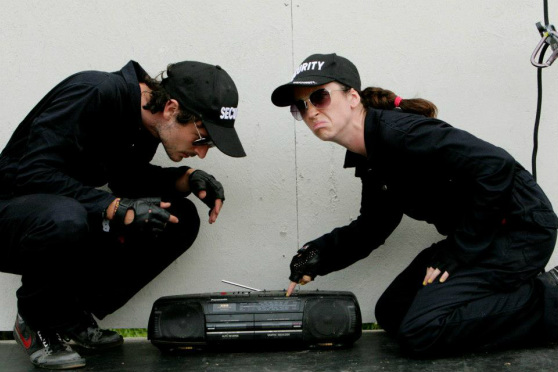 Commissioned by Boomtown festival, and created with support from Wired Aerial Theatre in Liverpool.  Full Tilt produced a 20 minute outdoor spectacular combining street theatre, dance, and circus. The show was presented over five nights during August 2012.

The show told the story of two criminals who under the guise of being legitimate security broke into a property in the mayfair area of the boom town! After abseiling from the first floor windows they come across a single piece of treasure, the boombox! The sounds they discover take them on an eclectic journey. They find themselves 'moving to the music' and enjoying the sounds of classical piano, drum n bass, and dubstep. The show climaxes in an aerial dance performance staged on the vertical wall of the house.

created to bespoke set and as a one off commission for the festival, Fully Tilted was well received and is set to create a new work for Boomtown 2013! 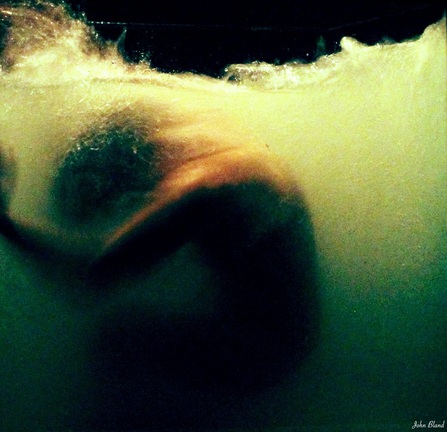 Marisa Carnesky's Tarot Drome was a devised piece of immersive promenade theatre performance staged in underground vaults of the Old Vic tunnels. The show featured ten solo performances from Carnesky's hand picked cast, consisting of some of London Cabarets hottest performers. Each artists developed a durational solo for the show, which they  performed whilst the audience freely moved around the space.

I was working for the first time in a metre squared glass human sized fish tank, and playing the major arcana card of temperance. The work is a dance theatre investigation on bespoke prop, exploring the many possibilities of the tank, and featured some beautiful acrobatics performed gracefully on the edges of the tanks steel frame. here is what the press had to say about the Tarot Drome; 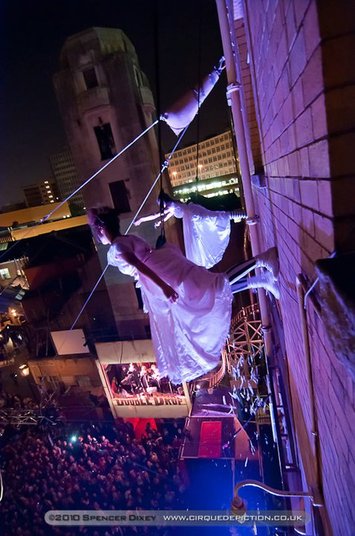 The last of the epic Carnyville's to happen at the island!

The Invisible Circus 'CarnyVille' shows quickly became a Bristol legend, each event growing in size and becoming more immersive and spectacular. Carnyville four ran for 8 nights over two subsequent long weekends, the longest run that had been attempted for a Carnyville. It was a show of epic proportions with hundreds of volunteers making up the majority of the cast, crew, and creatives.

The site specific aerial harness work produced by Full Tilt for previous Carnyville's had become trademark to these events. This final Carnyville, the last one ever! begged for something even bigger and better than what had been before!

And so it was;
the finale got extended to a full thirty minute spectacle, reprising many elements of the previous incarnations of the event, and extending the experience over thirty minutes with over two hundred performers and musicians involved in the short spectacular..

for more information on the invisible circus events and shows; 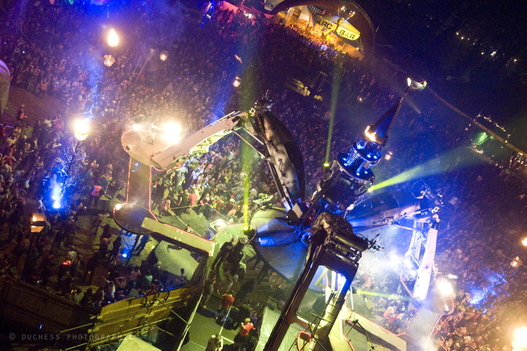 I worked with Arcadia in the development stages for their first large-scale in-house performance for Glastonbury 2010 .

The show was developed over two trial runs in Bristol's motion nightclub, before being rehearsed and put together for the big spider stage at Glastonbury festival.

The event included a thirty minute spectacular which was performed to live bespoke music from the free fall collective and 'the afterburner' a rolling programme of performances to accompany DJ's and bands  each evening. 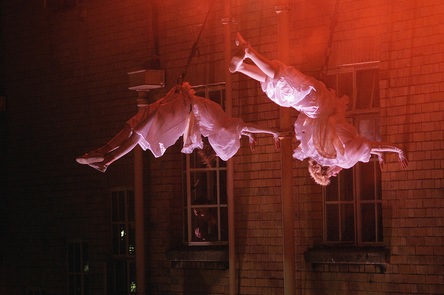 Carnyville 3 was a development of the previous Carnyville's. still on the same epic proportions as the other Carnyville events.

The story was of an ancient ghost town, one that used to be a lively city full of performers, a Bohemian paradise crowned with a world famous theatre 'the carny grande'. Things had changed in the world and people no longer left their homes to watch live entertainment, the birth of the television had left  it's mark, Carnyville fell to ruin, becoming a place of the past. The show told the story of the ghosts of Carnyville bringing the forgotten town back to life.

Full tilt directed the stunning ghost ensemble, a consistent through line of the show, with performances at regular intervals staged on a 20m high wire which traversed the outside space between the firestation buildings.